2013 was another great year for Buy to Let investors, with the demand for rental properties outstripping supply and rents increasing.

The average rent paid by tenants in Britain increased by 2% in 2013 to £854 a month, according to property firm Countrywide.

Tenants have been squeezed by rising prices, with many unable to access mortgages or raise the sums needed to buy a property.  The so-called “generation rent” have found themselves trapped in rental housing for longer and driving up demand for rented homes.

There are signs that the increased availability of loans for those with small deposits are allowing people to leave the rental market, which could cause rents to fall, but Countrywide said the number of prospective tenants was still outstripping supply in some areas of the country.

It said the increase in rents was broadly in line with the 1.9% rise in the median full-time incomes reported by the Office for National Statistics, but in some areas of the country pay lagged behind.

The figures, which are based on analysis of 50,000 rental properties, showed the biggest rent rises during 2013 were in Wales, where the average amount paid went up by 3.8%. However, it is still one of the cheapest areas in which to be a tenant, with an average monthly rent of £632 and a median income which increased by 4.8% over the same period.

In contrast, in Greater London, where rents went up by 3.4% over the year, median incomes were flat and the average rent stood at £1,133 a month in December.

In central London, Countrywide said costs had dipped by 0.2%, but the average monthly cost of renting still came in at £2,315. 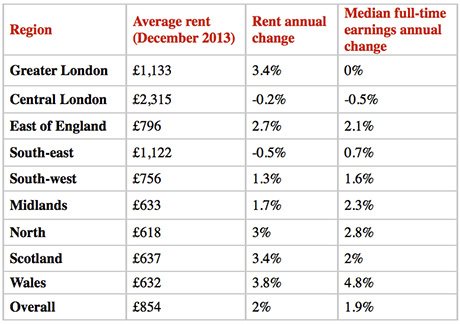 “Increased competition among tenants for properties has intensified, which has resulted in rental growth running at twice the level of 2012. The largest increases in demand have been in those towns and cities where the most new jobs have been created as the recovery spreads outwards from London.”

The Royal Institution of Chartered Surveyors has forecast that UK rents will rise by 2% in 2014.

According to letting agent Belvoir Letting, demand for buy to let homes will continue to drive the rental market in the coming year as accidental landlords sell up. Belvoir Letting claims accidental landlords will take the chance to sell their homes as prices rise and mortgage restrictions ease with the help of government backing. This… END_OF_DOCUMENT_TOKEN_TO_BE_REPLACED